Breaking Through The Communication Barrier With Birds

Submitted by Gitie on 16 November, 2010 - 17:40
by Francesca Doria (British Columbia)
In spite of all our New Year’s wishes, 2008 hadn’t begun well for my sister and I. Our Mum was bone-marrow transplanted and had been through a hard time, and our cat Émile, that had shared half of our lives with his endless care and reassuring love, was about to die of kidney failure. He had held out to help our mother and the two of us, but now he was wearing out, silently fading away. At the time our mother’s house had been restored, my sister and I had lived in until the inner works had started, so we had to move to our own flat where our mum already dwelt.
While I was staying with our mother and Émile, my sister Paola got back to the big house to tidy up and put in order everything. She immediately called me, informing that there was a jay she was feeding every day on my window sill and a pair of magpies building their nest on the top of our secular magnolia tree.
At first I was thrilled: I had always loved those elegant, intelligent, funny and noisy birds, and that news had surpassed my wish. But being in anxious state of mind, I nearly forgot both magpies and the friendly jay, until I came back home along with our mum, Émile and our other four cats.
The magpies were still at work: the male brought branches and other items, the female observed/examined them carefully, tried them out, sometimes discharged them, and he flew back and forth trying to find the best things to fit. 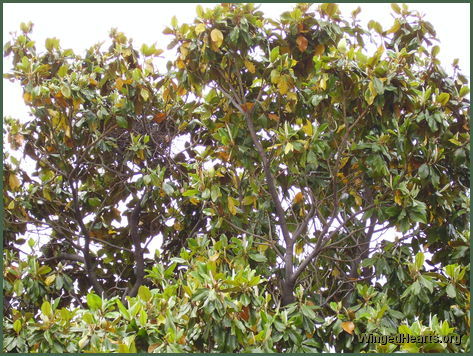