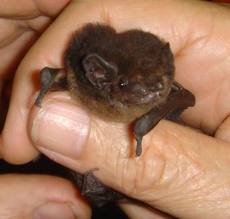 Microbats are natural insect terminators.  These little mammals  weigh around 3gms  - 150 gms and have a wingspan of approx 25 cm. Being nocturnal creatures they use echolocation to navigate and find their insects in the dark. Contrary to popular myth, the bats are not blind and do use their sight as well.  The largest species has a body length of only 11 cms.  A single microbat can eat  up to 1,200 mosquitoes and small insects in an hour which has earned them the well deserved reputation of being the nature's mosquito busters.  They also pollinate native flowers, many of which can only be pollinated at night. Microbats like their bigger cousins the flying foxes (also called megabats) are a vital part of the ecology of our forests and planet. Recent surveys in Australia have shown that in grain-growing regions, the microbats fed solely on grain weevils, thus helping crop protection by reducing the use of pesticides.  Microbats also eat midges, termites, lawn grub moths and other harmful insects.

Bat conservation agencies remind people not to use insect zappers as these kill the good insects along with the bad and deplete the insect food for microbats.  Many people are realising that microbats are very beneficial to nature and humans.

Building bat houses are a way to help bats survive as they are suffering a major decline in population due to loss of habitat. Many bat houses fail because of problems in their design or placement.

1.  Lack of sufficient grooves in the landing plate in the interior for bats to hold onto.  Bats needs a roughened surface. Stapled screening provided in some boxes may not be suitable for the bats.

3.  Unpainted wood - will warp or rot causing the bat house to fall apart in a few seasons. Use of nails instead of screws also cause injury to bats once the boxes start warping.

4. Lack of sunlight - Bat houses need at least  seven hours of morning sun.  Bat houses mounted on trees or placed under eaves  are unlikely to get enough sunlight.  Placing them in too bright an area will also cause bats to avoid the box.

5. Lack of permanent water. Bats do need water to drink, but keep the bat house clear of bright surfaces that reflect light into it.

As knowledge of bats grows - designs are being updated, tall open-bottomed houses like the one pictured are now preferred over small closed bottomed designs.

Bats tend to let the houses weather before occupying them. It can take up to 3 years for bats to use a house, but they ar estayers and once they make it their home, they will there for years, happily keeping the insects in your area under control.