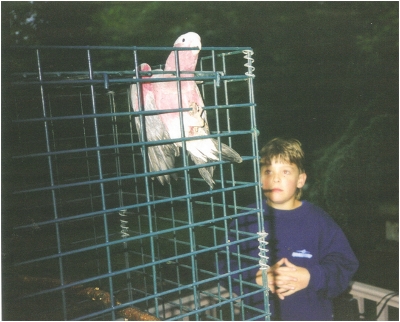 We moved from the city to a property on the Bellarine Peninsula, Victoria that combined plant nursery and display gardens along with natural bushland. Throughout the 12 (drought stricken) years we lived there we developed a keen interest in our resident birds and forged wonderful relationships with many of them – especially Magpies, ‘Esmerelda’, ‘Whiteback’ and their successive broods.

Our house had many floor to ceiling windows and a large deck overlooking gardens, bush and a dam – an idyllic spot to relax and observe wildlife interaction, behaviour and events as they unfolded.

Alex & Me: How a Scientist and a Parrot Discovered a Hidden World of Animal Intelligence--and Formed a Deep Bond in the Process - by Dr Irene Pepperberg

I found the book both remarkable and sad. Dr Irene Pepperberg describes her early childhood which set her on a course to demonstrate the cognitive abilities of African greys and her life long struggle to prove to the close minded and close hearted scientific world that birds were capable of intelligence far beyond humans had credited them.  Alex’s impressive mastery included a vocabulary of over 100 words, new shapes and colours. He even invented the concept of zero or nothing of his own accord to surprise of all in the research lab.

In a captivating, highly readable style Pepperberg describes her struggles with life’s hardships through a divorce, relocations and loss of funding all through which she somehow managed to keep the study going.  The book is a tribute to Alex. During his life Pepperberg had to stay aloof in order to maintain the level of objectiveness demanded by her peers in order to her results seriously. It was only after his death that she could allow herself to express the affection she felt for him.

For sceptics who have spent their lives turning their back on common sense and insisting on denying that animals and birds are intelligent, conscious creatures, the book clearly provides the proof that they have always sought.

What The Robin Knows by Jon Young - Book review

Author Jon Young opens your mind and awareness to the elusive world of birds communications within their families and community groups. Birder Jon Young is a naturalist with training in tracking by expert Shamans. He brings his wealth of knowledge into the study of listening to the birds, following their movements to understand the events and activities in their lives.

With delightful stories and clear step by step examples he takes the novice through a journey of discovery of bird songs, vocalisations, their motivations behind their patterns of movements and their alarm calls. Young does not just describe the birds activities but explains the importance each of these plays in their complex lives and how people can connect with them in non-intrusive way. Both experienced and novice readers who follow his advice and practice those steps will find their lives enriched with deeper connections to birds in nature.

Corvids are revered in many indigenous cultures and admired for their intelligence and wisdom. Yet, the phrases ‘bird brains’ and ‘feather brains’ often used derogatively emerged based on the incorrect assumption that birds are dumb, unthinking and unfeeling creatures.

Renowned author of natural history Candace Savage distils some of the incredible abilities of the corvids discovered by researchers and presents them in this beautiful book with over 60 spectacular photographs by the top international photographers.

“In one experiment, for instance, a raven was given the task of identifying the odd-shaped object in an array of six otherwise identical items. Its performance put it on par with gorillas and chimps, our own species’ closest relatives.” (p 18, The Secret of their Success)

“In one short summer season, a single nutcracker is estimated to cache between 22,000 and 33,000 sees in up to 7,500 different places. To survive the winter and spring, it must recover about a third of these tiny reserves, all of which are buried in loose soil. Although most caches are made on windswept ridges or south-facing slopes where the snow cover is light, nutccrackers have been known to unearth caches from drifts that lie hip deep.” (p 120, The Nutcracker Never Forgets).

Gifts of The Crow by John Marzluff and Tony Angell

In Indian legends crows are considered to be one of the most intelligent of birds. So I was quite surprised to discover when I first came to Australia the late seventies that in western culture of that time, birds (and other animals) were not considered to have consciousness and cognitive abilities. In our backyard the crows do not mind that the magpies, butcherbirds and noisy-miners take priority over them. They have repeatedly shown themselves to be sensitive, attentive to our feelings, sympathetic, grateful and funny birds.

I was delighted to read John Marzluff and Tony Angell’s book The Gift of the Crow. Marzluff is a professor of Wildlife Science at the University of Washington and has authored four books and hundreds of papers on bird behaviour. Tony Angell is has authored and illustrated numerous award winning books on natural history.

The book covers two major aspects of Crow behaviour. Firstly in great detail the authors describe the findings of research done on crows with regard to their abilities to communicate with language, play and frolic, indulge in delinquent behaviour, act with passion, take risks and display an awareness that most people have mistakenly assumed to be beyond the capabilities of birds.