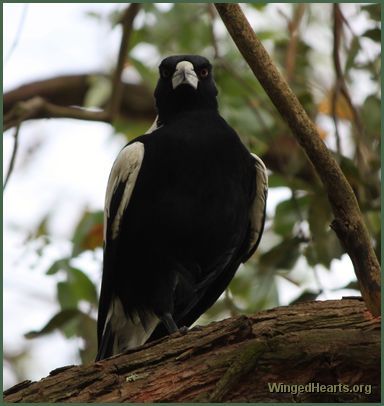 For several weeks I watched out of the kitchen window as a magpie, now known as Maggie rested in our backyard. From a distance I could see that he had an injured leg, but whenever I attempted to get a closer look he would fly away. 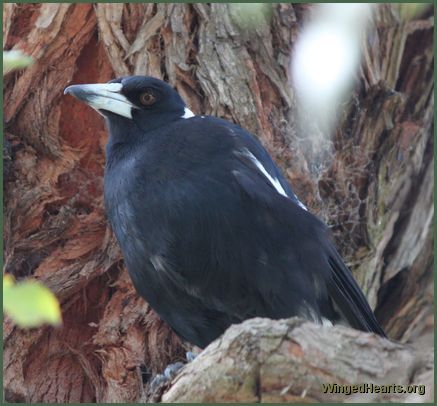 One evening I arrived home from work to find Maggie squawking in the tree next to our garage. I was surprised to see Maggie here, as in the past he had never come so close to the house. The winter weather had been relentless for days with constant wind and rain. Maggie was soaking wet with an injured leg that affected his balance and the ability to perch on a branch. I put my belongings inside but by the time I returned he was gone, nowhere to be found.  Later that evening I found a desperate Maggie trying to escape the clutches of a cat. I brought Maggie inside out of harms way where he was now dry, warm and quietly resting.

In the morning I contacted local wildlife carer Marie Greiner. Maggie’s foot was hanging on by a tiny thread of bone which would need to be removed. Marie advised Maggie was in quite good condition and would certainly be able to survive even with one leg. Maggie was in Marie’s expert care for a fortnight where he healed and regained strength. Marie released Maggie back into my yard. Within minutes of Maggie’s release he was greeted by another magpie who appeared delighted at his return. 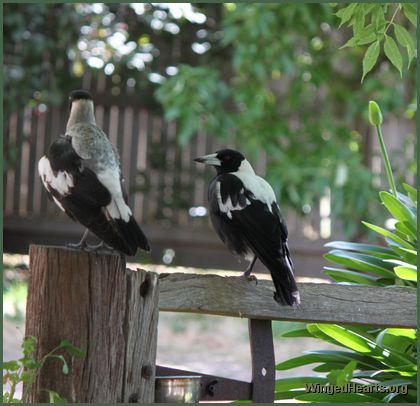 In the weeks following I didn’t see Maggie and wondered if he had survived.  Unexpectedly, one morning he reappeared and I gave him some cheese as a treat. So began the 6am morning ritual. Every day, rain, hail or shine, Maggie perches on the clothesline and waits for his cheese. Of course, word spread quickly. Some mornings there are up to 6 magpies who come for their share of the cheese. 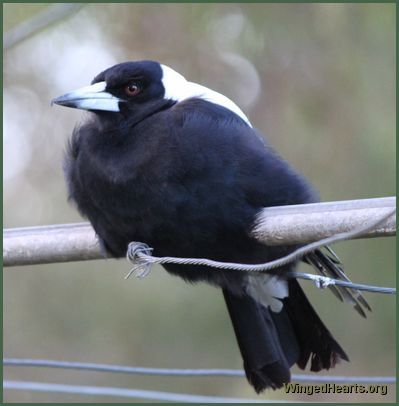 Maggie’s courageous decision to trust me saved his life. He is inquisitive, brave, intelligent and proud. I feel privileged to be a part of this beautiful creature’s world. 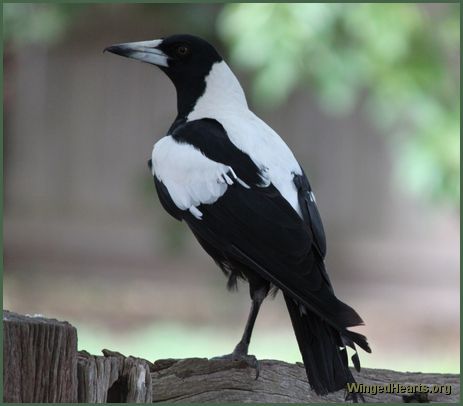 Thanks Veronia for sharing Maggie's story with us.  -- Gitie house, Editor

What a heartwarming story..i

What a heartwarming story..i think Maggies are the most beautiful, intelligent, proud and amazing birds..there are a a pair that have been in my neighbourhood for 15 years or more and they visit me every day..i love them so much..they are beautiful creatures who make me smile everyday..they are a gift from God..

Thanks Lyn. We too believe that they are beautiful animals. They have taught us much about their rich social and emotional lives. They are definitely a gift from God.