The unimaginable Gulf Oil Spill has left us all with an intense combination of emotions, from sadness to anger to helplessness.

How could this happen? And now that the leak has been stopped, what can we do as individuals to help fix this horrific environmental disaster?

Musical duo Wilderland answers the call by releasing their new song "Fragile Day" with 100% of all proceeds benefiting the habitat affected by this tragedy.

Heralding from the mountains of Ashland, Oregon, Wilderland features singer-songwriters Scott Blum and Kat Sanchez. A veteran from the music industry, Blum (multimedia producer for Peter Gabriel, Soundgarden and many others) balances the exquisite vocal stylings of Sanchez who had been a member of a wide range of local bands most of her life.

After writing several original songs, the musicians began collaborating with renowned underground DJ and multi-instrumentalist Rara Avis (Desert Dwellers, Shaman's Dream) to realize their musical vision. It was during these studio sessions that the Gulf Oil Spill tragedy happened which deeply affected all involved in the project. Ironically, the song "Fragile Day" was being worked on at that very moment, and when explaining the song's lyrics to Avis, Blum realized that a powerful synchronicity was afoot. The song included the lyric "Fish are dimming while they're swimming / Blackened ocean of foam" which, although written nearly two years prior, was about fish dying because of an oil spill. Credit is given to Blum's wife Madisyn Taylor who suggested that "Fragile Day" be released immediately with all proceeds benefiting the habitat affected by the oil spill.

You can download two versions of "Fragile Day" by Wilderland with 100% of the proceeds donated to three important charities helping the habitat affected by the Gulf Oil Spill Tragedy. These organizations include The Gulf Restoration Network, EarthShare and the WILD Foundation.

Visit www.FragileDay.com to watch the emotionally powerful video and download the song to support this worthy cause.

Thank you for helping.

"We have a pair of red-tailed hawks that nest each year on our 5th floor ledge.  Usually mid-March, the mom starts her annual ‘house cleaning’ then commences to ‘just sit’.  This year there were 3 eggs; all survived. Last year the same number  were in the nest, but only two survived.  Several years ago, one of the ‘youngins’ fell out of a tree that was near the bldg. Because its wings weren’t strong enough to make it fly back up to the nest, it wandered back and forth on the wall with its mother was dutifully watching and calling to it from across the street and often making low sweeps over it.  Some agricultural students from Trinity College were called in to try to capture it, which they were able to, somehow.  I had the good fortune of actually seeing the hawk ‘up close and personal’.  It certainly was a magnificent, yet scary example of power. I couldn’t believe the length of its talons – to gaze into its eyes was unnerving at best; it was if it could look through to your soul and beyond.  ‘Determination’ was the name of the game because somehow the bird escaped again, this time crossing the road and found its way into the bushes at the Bushnell; the DEP (Dept. of Environmental Protection) was contacted.  They found the bird, put a large towel over its head, brought it into the building, up the elevator (wished I’d been on that ride up – can you ever imagine getting on and seeing this ‘thing’ sitting on someone’s arm covered with a towel???) to the 5th floor, opened a casement window and put it back on the ledge where it was supposed to be. "

What is Your Bird Story? Share It On WingedHearts.org 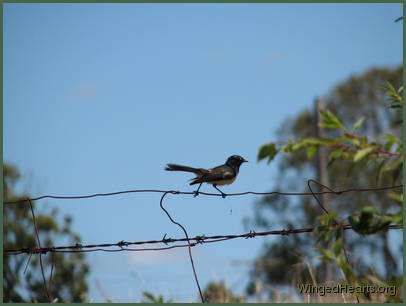 The 30 day blog challenge is over for those of us who live down under in Australia.  It's already 1 hour into the 1st July (yes I am so addicted to writing for you that I'm still up at 1.00 am.)

Thank you all so much for your interest and comments.  I really appreciate all of you who made the time to read my stories and give me your feedback.  I've had a wonderful experience sharing a little of what I have learned from these remarkable creatures with all of you.

We have so much more to learn and this can only be achieved if we share our stories and learn from examples.

I believe we all have an amazing bird story hidden in our memories.

What is Your Bird Story?

It's time to tell all the rest of us.

To Rescue... Or Not To Rescue A Baby Bird?

What should one do when one finds a baby bird and its parents seem nowhere around? 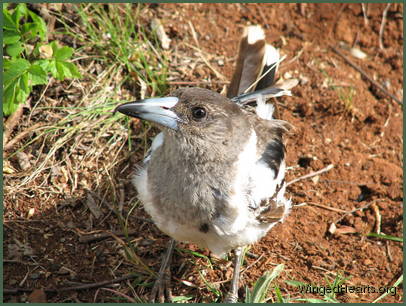 The answer depends on many factors and is not as simple as we would like it to be.  Much depends upon the age/stage of the chick, what type of chick it is and the state of the individual bird and whether it is really orphaned or just appears so.

Here are some quick tips:

7 Ways To Give Caged Birds A Better Quallity of Life

You may be a very kind and loving bird owner or you may not have birds at all.  But please help spread this message so that we can create a kinder world for these beautiful creatures. 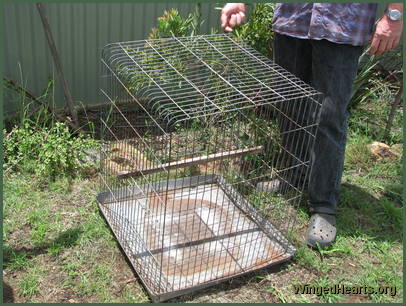 Pet birds are often confined to cages that are far too small for them to enjoy any reasonable quality of life. Canaries and budgies are sometimes kept in cages as small as a teapot.  Large birds like cockatoos and african greys are lucky to be kept in cages as big as the one in the picture on the left.  There is no room for the bird to even stretch their wings or get any exercise. The metal floor often a wire mesh is too harsh on their claws. The perches are also inappropriate as they are not suited to the size of their claws and the birds cannot flex their muscles.  Sitting in a cramped position for a life time of imprisonment, the birds get cranky and bite.  Then they are tagged as trouble makers and treated even worse. Large birds live for 60 -70 years in this form of confinement.  The wire mesh on the sides of the cage often damage their wings and beaks.

Yet there are some easy ways of improving their quality of life in significant ways.