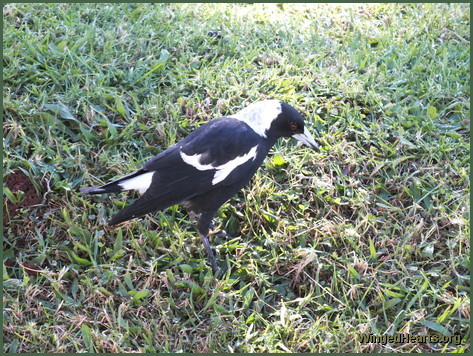 There are big changes in our backyard. Vicky our Mummy magpie for 11 years, suddenly gave up her nest to a newcomer.

Vicky, her mate Bertie and their two girls hung out with this newcomer for a few days. We thought the newcomer was a visiting guest. Then Vicky stopped coming for a feed with Bertie and her girls Shelly & Nelly (BSN).  BSN would come by themselves and Vicky would come just once a day, fairly late and leave quickly after eating only a small bit. 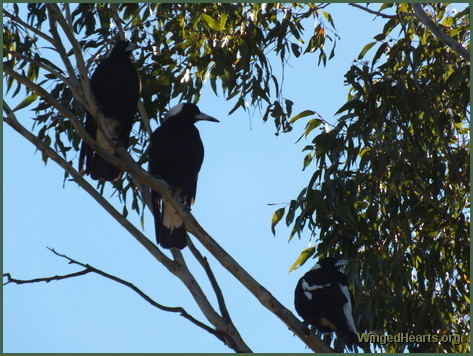 We asked Vicky to tell us what was going on.  At first we thought being a protocol bird, she was staying with the guest (pic right) till Bertie-Shelly-Nelly (BSN) could give the guest company giving her the chance to come down. But then we realised something was amiss when BSN started getting bossy with Vicky and she looked afraid of them. She started hiding from them under the bush. We kept asking her to tell us what was happening and also scolded BSN.

Gradually we pieced together that Vicky had abdicated her nest and breeding territory to the newcomer. We know she is much older than Bertie because she took him as a mate in late 2009 after Maggie had died in Jan 2009. Bertie would now be about 8 years old - in his prime so to speak. Vicky would be around 15-17 years old. Last year she didn't have any kids either. Vicky has also been getting weaker in her flying abilities over the tears. So they must have decided that she was now too old and and Bertie being much younger should have another chance. The girls are with Bertie - as magpie inheritance rules wise the girls own this territory being Vicky's kids - but Bertie is an outsider so doesn't own it. Monty (Vicky and Maggie's son) should normally inherit it - and he has been up to let them know he's around. (No idea how all this is going to pan out once breeding time actually arrives in a few weeks time.) 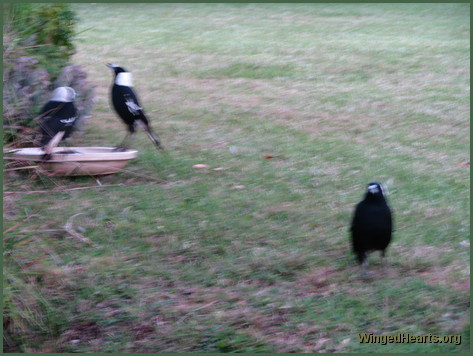 Vicky has spent some time with Monty (right on the water bowl) and Kenny (left on the water bowl)(Bertie and Vicky's first born). We initially thought Kenny was hanging around with Monty's singles group, then discovered that she was actually coming from a different direction. Vicky(front) knows she has their support as they've visited her occasionally (pic left - taken at dusk so the light was too low), but both kids have their own groups at a fair distance and Vicky doesn't seem interested in being with them for long periods of time.  (the picture was taken in fading light so the camera didn't focus too well.)

We think Vicky has been persuaded by her family to accept this new situation and Vicky was happy to oblige - being tired of nesting and breeding. But she wanted to be able to come into our yard for a short while each day - at a separate time from the rest of the gang. From all the body language we think she only got upset when the family started getting mean towards her. That took her by surprise as they were not holding their side of the bargain. 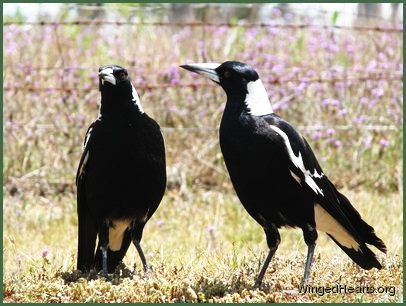 All Vicky seems to want to do is sit under the tree - in the same spot where Maggie used to sit before he died - also the same spot where one of their daughters Sophie had also died. Her family want to push her out as they want to keep our yard as part of their breeding territory - being a good food source for the new bubs when they arrive later in the season. Also while Vicky comes here, protocol demands that Bertie's new mate cannot come.

However, we humans also have much to stay about who occupies our territory and eats our food. We've been very firm. No Vicky means no food for any of the other birds. They have to bring her and let her eat first if they want a feed. 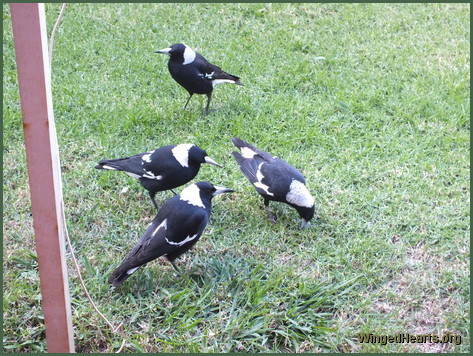 So they're all learning to treat her with respect albeit very grudgingly.  Some days are good and they all behave and Vicky even feels safe to potter around our backyard - only around a couple of bushes and the lily-pots - but still at least she is getting out of hiding.

Other days its a regular battle with the BSN. We even feed BSN up the road a fair way away so they understand that our yard is no longer part of their territory. If they ever get food here now it is because of Vicky and when she gives permission by feeling comfortable enough in their company to stand beside them. It's been quite a training effort on our part and is still an on-going job.

Billy &his son Donny, our other mapie family who only are supposed to come to the front yard, having seen a power vacuum now that BSN are not around as much, have decided that they should push Vicky out and take over. So we have had to rouse on them and stop feeding them as well unless they behave.

Other birds only get fed after Vicky has eaten without being harassed or disrupted. We don't know how many days she has, but regardless of how short or how long - we're not letting anyone usurp her from our home. She is a very special bird for many reasons and I'm just so glad that we're able to keep an eye out for her. (I keep telling her that I want her to come to us when she is ailing and not die alone in the bush.)

Vicky has taught us much about magpie life. Some of the topics include:

How To Speak Magpie-1

How To Speak Magpie-2

and we've had years of joy and learning from her gorgeous kids including: