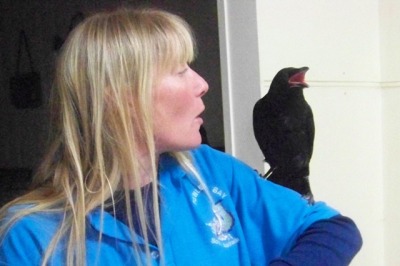 A couple of years passed and we had moved to another farm, when Darren came home with a baby crow that he had found on the road.
I named him “Crow” this crow was even nosier than Camry (Darren said this one must be a girl).
Crow lived in our sun room, Crow was very smart she new she wasn’t allowed to enter into the kitchen so she would just sit in the doorway and poke her head in to see what we were doing.
We had a couple of cats that Crow would torment them by grabbing their tails and pulling them and chase them around the sunroom she had us laughing all the time.
We even heard crow say “hello” a couple of times.  In summer she would follow me into the 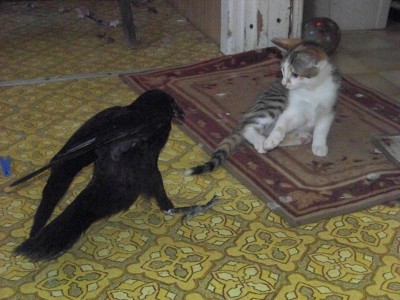 shower she loved water as well.
We had moved her in to an aviary and would leave the door open during the day.
She would fly around the farm during the day and put herself back into the aviary at night. This went on for months she would always come back at night.
Than one day we had what seemed like a thousand crows land in out front paddock, crow didn’t come back that night, and the next.
I would still put her food in her bowl every night hoping she would come home. A week later all those crows came back, I ran outside to see if she was with them and she was in the tree near the house and she had a friend with her. Crow came down to take a piece of meat and then straight back up the tree.
It was almost like she was saying Hi thanks for looking after me but im ok now I have a new friend ……. See ya...
We would occasionally see her around the farm; I would leave her a bantam egg on a metal drum near the kangaroo enclosure every now and then, and the next day I would find the egg on the ground with a hole in it.
We have now moved 900kms to another farm and I still wonder if she is ok …im sure she just fine Darren tells me all the time.
We just love crows they are so very smart and VERY cheeky, every time I see or hear one it just makes me smile.
Belinda
---  Thanks Belinda - lovely reading about your wonderful experiences with these amazing birds.  -- Gitie
Species:
Crow
crows
Stories about:
human-bird friendships
Bookmark/Search this post with